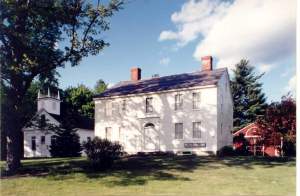 .
The 2015 calendar of events is forthcoming!
The Swift River Valley Historical Society is located in the small village of North New Salem, MA. In the period between 1927 and 1938 four Massachusetts towns—Prescott, Enfield, Dana and Greenwich—ceased to exist.  The land was taken by the State and flooded to create the Quabbin Reservoir which new supplies drinking water for most of the greater Boston area.   Families forced out of their  homes and towns took with them household goods, personal items and all things that created a family unit.  Over time, many of these items found a home at the Swift River Valley Historical Society. Genealogy research is generally possible on open days, or call for an appointment.

Return to Locations to learn about other Pioneer Valley History Network organizations.

Please note: your donation is to the Pioneer Valley History Network, not a member organization.